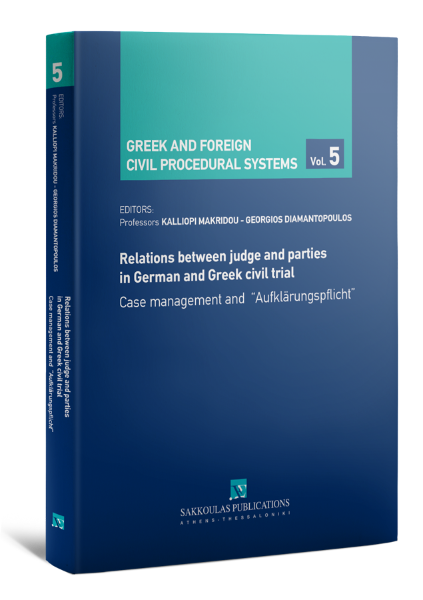 Essays of esteemed colleagues which compare German and Greek Procedural Law, particularly concerned with the «Relations Between Judge and Parties in the Civil Trial» especially under the focus of «Case management and “Aufklärungspflicht“»

opening of the conference (by Emeritus Prof. Constantin Calavros)

The Consequences of the Court’s Failure to Provide Hints and Feedback (by Prof. Dr. Christoph Kern)

4. From Soft to Hard Prescription

2. Within the Ongoing Proceedings.

3. On the Appellate Level.

4. On Review for Violation of the Right to Be Heard.

5. Outside the Actual Proceedings.

2. The Cost Sanction on the State.

3. Sanctions on the Judges.

I. A Core Issue and the German Code of Civil Procedure.

1. The Legislator’s Point of View.

b). Efficiency - Strengthening the First Instance and Abridging Appeals

a). Right to Justice (“Justizgewähranspruch”).

b). Right to a Legal Hearing.

b). Impartiality of the Judge.

4. Relationship Between these Aspects – First Conclusions.

1. Distinguishing Points of Fact from Points of Law.

2. Object of Clarification Duties: “The” Facts, “the” Law – or the Court’s Opinion?

3. “Working Towards.” – Scope of the Clarification Duty.

4. Reduced Clarification Duties Towards a Party Represented By a Lawyer?.

5. Clarification Duty Despite Indication by the Opposing Party?.

a). Clarifying the Facts or the Parties’ Factual Allegations?.

b). Encouraging (Further) Presentations of Proof.

c). Hearing of Evidence ex officio; Interrogation and Hearing of a Party

ΙΙ. What is and what do we expect from Case Management? – A first approach.

ΙΙΙ. Case management in the environment of the “struggle”- Some reflections on theoretical prerequisites

1. Judge’s Duties and Parties interests in the civil procedure.

2. On orality of the trial as a prerequisite of case management.

ΙV. Case management in English (and US American) law.

2. Orality and jury trial in the English legal tradition.

V. A brief comparative approach of the civilian style.

a) The decline of orality.

b) “Trial” and Evidence before and by professionals.

1. The role of the judge and the parties in Greek civil procedure: Αn introduction.

2. Fundamental principles: «The rules of the game».

a). Why observance of fundamental principles matters?.

b). Fundamental principles in more detail.

1. History and aims of the Project.

b). The role of the parties.

b). Remedy of vagueness as a motive.

(a). “significant disruption in rendition of Justice” (“justice delayed”).

(b). Judgment based on “excessive formalism” (“justice denied”).

(c). acceleration of the proceedings and the saving of judicial labor (“fiscal unsustainability”)

4. Rectification of vagueness: Co – responsibility of the court and the parties.

5. Reduced duty towards a party represented by a lawyer?.

6. Reduced duty in a default trial?.

1. Facts presented by the parties.

b). Actions and exceptions.

1. Is orality a prerequisite for applying the rule?.

a). The legislator’s view: Guidance through dialogue with the parties.

b) Orality “under persecution”: The 2015 comprehensive reform of civil procedure

a). Scope of application in first Instance proceedings.

b) Scope of application in appellate proceedings.

(b). Guidance over incomplete or ambiguous ground(s) of appeal.

3. Scope of application in cassation and reopening of judgments proceedings.

The power of the court of interim measures to collect sua sponte evidence as a problem of delineation of the relation between court and parties (by Prof. Dr. Panayiotis Yiannopoulos)

II. The disclosure of evidence.