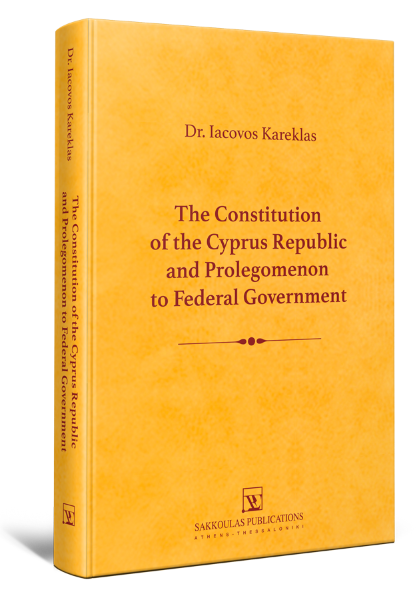 I. Kareklas, The Constitution of the Cyprus Republic and Prolegomenon to Federal Government, 2018

The present monograph, in its first part, seeks to present the proposals which the British Government had submitted in the context of its foreign policy before the grant of independence to the Republic of Cyprus in 1959. It initially comprises a concise overview of some basic questions arising out of the British occupation of the island (1878-1959), and the efforts of the Greek Cypriots for independence before the UN institutions. Then it moves on to examine the gist of the ideas embodied in the constitutional plans for Cyprus as these were elaborated in the course of negotiations. Further, it provides an analysis of the structure and peculiarities of the current Cyprus Constitution, and ends up with the conclusion that, despite its drawbacks, this very political Constitution, with some fundamental amendments, could form the basis for a viable settlement of the pending international Cyprus Question.

The second part is intended to explore the question whether a Federal Constitution, agreed in the first instance between the Republic of Cyprus and the Turkish Cypriot community respectively, may form the basis for a just and viable settlement to the Cyprus problem; particularly whether this kind of constitutional government may properly safeguard Human Rights on Cyprus.

After reference to very important statements made by Turkish politicians revealing the real intentions of Turkey as against the island, as well as fleshing out the concept of federalism, five or six main arguments at least are employed to prove that the federal system cannot, in the opinion of the author, be an appropriate framework to the solution of the aforesaid affair.

The third part contains a recording made for the Oxford Colonial Records Project in Oxford on the 23rd April, 1971. It is a recording of a conversation with Lord Caradon who held Colonial Governorships and then became an Official Representative and later a Ministerial Representative in the United Nations. The interviewer is W.P. Kirkman who was Africa and Commonwealth Correspondent of The Times and is now Secretary of the University of Cambridge Appointments Board.

In the course of the interview, Sir Hugh Foot gives valuable information on Colonial history, the role of individuals in the formulation of British foreign policy and his relations with these diplomats, provides useful insight into the constitutional-political practice of ministerial responsibility, and thoroughly elaborates on the question of Cyprus.

and the Cyprus Republic Constitution

Chapter I: Legal Questions arising out of the British Occupation

Chapter IV: The Structure and legal peculiarities of the Constitution

Chapter V: Thoughts on a Settlement of the Cyprus International Dispute

Chapter VII: The Concept of Federalism

Chapter X: European Union involvement in the settlement of the Cyprus Issue