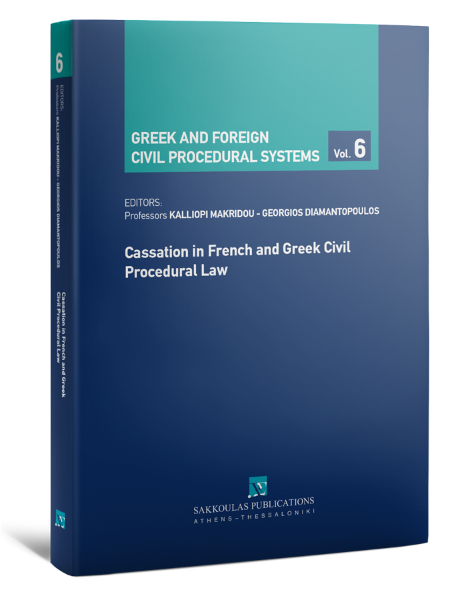 Comparison among different procedural systems prevents the isolation of legal orders and leads to the improvement of institutions. Cassation in French and Greek civil procedural law is in the center of this sixth volume.

A comparative approach to the conditions of recourse and administration of justice in the highest civil courts of two European countries, which, although belonging to the family of so-called continental law, and in particular the civil code, do not have the same procedural and judicial traditions, is undoubtedly a challenging task.

In the following essays, the reader will find useful analyses of Greek and French procedural law in English, a language neutral to the communication between the jurists of the two jurisdictions, which is in itself a challenging exercise. For, both in the practice of the Greek Areios Pagos and, especially, of the French Cour de cassation, linguistic patterns are very important not only for the functioning of these jurisdictions, but also for the law itself.

The distinction between facts and law on cassation - The evolution of the control exercised by the French Court of cassation (by Prof. Dr. Frédérique Ferrand)

2. Aims of the cassation

II. The classical distinction between facts and law

a) Legal norms under review

b) Fact finding and assessment

a) Requirements to be fulfilled

c) Statistical data relating to the request for advisory opinion

The evolution of the control exercised by the French Court of cassation: the new scrutiny in concreto of the conformity with the European Convention on Human Rights

The aim of cassation and the conditions of filing a cassation (decisions subject to cassation, parties, time period) under French Law (by Prof. Dr. Lucie Mayer)

The mission pursued by cassation of decisions in breach of a legal rule: to ensure compliance with the law

The missions pursued by means of the interpretation of the legal rule applicable to the dispute: to ensure the unity and evolution of the law

2. A specific appeal: appeal in the interest of the law

The contemporary debate on the importance of its respective missions and, more essentially, on the nature of the power of the Court of cassation

A. Should the mission to review legality be reduced?

Does the Court of cassation have the power to create norms?

The “realist” approach: the Court of cassation has the power to create norms

The “formalistic” approach: the Court of cassation has no normative power, but its decisions have normative significance

The practical implications of the debate: the system of cassation and the changes considered or effected

A. The degree of openness of access to the Court of cassation

1. The admissibility of the initial appeal for cassation

In prospective law: the plan, currently abandoned, to implement selection of appeals for cassation

B. Other practical implications

1. The modulation over time of reversals in case law

2. The requirement to give reasons for a decision

The aim of cassation and the conditions of filing a cassation (decisions subject to cassation, parties, time period) under Greek Law (by Prof. Dr. Dimitrios Tsikrikas)

1. The historical evolution of cassation in the European law

The French and German law before the French revolution

The cassation after the French revolution and Napoleon’s codification

The aim of cassation in the contemporary Greek procedural law

2. The proceeding of cassation

3. Cassation in the interest of the law

The dominant position of the parties in the proceeding of cassation

2. The violation of foreign substantive and procedural law

V. Decisions which can be subject to a cassation

Legitimation and time period to file a cassation – cassation in the interest of the law.

The distinction between facts and law on cassation – The evolution of the control exercised by the Court of Cassation under Greek law (by Assoc. Prof. Dr. Ioannis Delikostopoulos)

I. The creation of a system of law

Specification of vague legal concepts and cassation review of the extreme limits of legal concepts of dual hypostasis through the principle of proportionality. The evolution of the control exercised by the Court of Cassation

II. Initiation of proceeding of cassation

III. Representation of parties before the Supreme Court